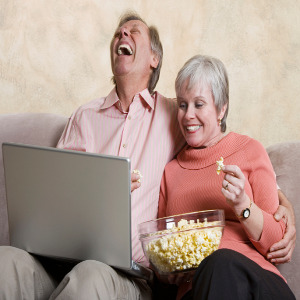 Watching TV shows when the broadcaster schedules them is now optional, as is using a traditional TV screen for viewing. That being said, a majority of Americans say they still do that, though not all for the same reasons.

There are now many sources of television programming, movies and other video content as well as a variety of ways to bring it into our homes and watch it.

Seniors who were raised on just a few television options – and their TV as the only way to view video content in their homes – understandably lag younger generations in many aspects of adopting the new technologies.

Many are catching up though, which makes us feel better about a future in which aging adults will experience benefits from technological innovation in many aspects of their lives — if only they are willing to jump on board.

That’s why a recent research report from the Consumer Electronics Association, the ones who put on International CES each year, has us growing even more optimistic about seniors’ willingness to give tech a chance in their homes.

Regular visitors to Senior Care Corner know we feel it’s important for seniors to gain comfort with technology in their homes and lives, especially those who are uncomfortable with or resistant to tech. It is becoming more and more clear that innovation is going to result in many devices, apps and services to help seniors live with greater health, safety and comfort in the homes of their choice longer than is possible today.

That technology isn’t all in the future, either, as some of it is available and aiding older adults today.

As CEA Members, we are able to not only obtain and read research reports as soon as their available but also provide input into the research priorities of the organization. We are glad to see the role of older adults growing in their research and expect to see even more emphasis in the future. Unfortunately, many studies are like the current one, for which we can only talk about “older adults” and not seniors because the breakpoint is 55 years old rather than 65. Still, there are many seniors in the statistics — and today’s 55+ year old will be a senior before long.

Part of helping senior loved ones prepare for the technology of the future is to understand where they stand with regard to today’s tech. That’s where studies like this can help. It’s important we remember, though, that our own loved ones are individuals and may not fall into line with the statistics so we need to understand their own needs and feelings.

But back to what’s in the research…

One area in which older adults don’t lag other age groups is in viewing television shows “live,” or as their initially broadcast by the network, which a high percentage of adults do in spite of the time-shifting technologies available. Their reasons for doing so done line up with others, though.

While the “when” of watching television and other video in the home is interesting, the “how” is more telling about older adults’ adoption of technology.

Despite all we hear about the alternatives, it’s really no surprise to hear that a majority of adults in all age groups watch even downloaded or streamed video content on a television, with older adults a little more likely than most age groups to do their viewing on an HD television.

If television technology adoption is an indication of willingness to bring the “new” into their homes, older adults’ indication in the study of greater adoption of internet-enabled televisions – even if only slightly more than other age groups – is a positive sign for the future.

There is more good news in the viewing area. Yes, older adults lag younger ones when it comes to viewing video content on laptops and tablets, which is not a surprise, but they don’t lag by as much as might be expected.

Do you find yourself watching much streamed or downloaded video on your smartphone? While a majority of adults under age 45 indicate they do so, fewer than one in seven older adults agreed. We need to remember, though, that a smaller percentage of older adults even have smartphones.

Willingness to Adopt Tech is Key

Benefiting from technology, both now and in the future, requires that seniors first adopt and use the innovations that become available. The CEA research has some mixed news in that regard.

Older adults are still least likely to use new technology as soon as it becomes available, with only a small number saying they do so, but growing numbers say they buy it soon after.

On the other side of the question, forty percent of older adults – far more than other age groups – say they purchase new technology only after it’s commonplace or when it’s the only alternative. Those may be the spots where family members might step in and nudge senior loved ones toward new technology — maybe even buy it for them.

Senior Loved Ones Not Adopting Tech?

If you decide your older loved one is among those who need a nudge toward technology, what steps can you take beyond making the purchase for them? After all, you don’t want to spend good money on a device that just gathers dust.

This is a case where taking a few small steps can lead to bigger ones, as we have heard from many family caregivers and some seniors themselves. Need some ideas for steps? How about…

Along with seniors, we as family caregivers need to keep up with technology as it advances. We need to be comfortable with tech that might benefit our loved ones to help them screen it. In addition, it may be harder for them to accept something that they don’t see us fully understanding and accepting already.

Bring on the innovation!