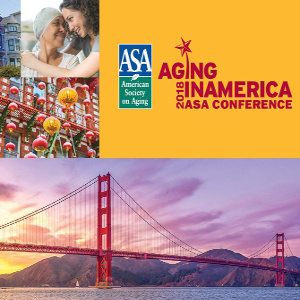 3,000 people attended Aging in America 2018, representing tens of millions more who care for and about older adults.

The conference covered a wide range of topics of interest to those who are aging — that’s all of us, right? — and those who care for older adults.

We met many people and companies with ideas, products, and services that intrigued us enough that we will cover more in depth over the coming months at Senior Care Corner®, including some we will bring you in future episodes of the Senior Care Corner Show.

There were a number of eye-opening presentations, including the emotional discussion by Brian Kursonis (withALZmyHeart), a 56 year old who was diagnosed with Alzheimer’s disease two years ago after a year-long battle to get doctors to identify the cause of his symptoms.

We also heard a number of speakers who left us shaking our heads, some whose outlook seemed too narrow, a few who didn’t seem to want to hear views that differed from their own, and others who simply seemed out of touch with the times. In other words, a real cross-section of people and perspectives.

All of whom cared deeply about the needs of seniors and those helping to meet their needs.

Aging in America 2018, often referred to as AiA18, covered a broad range of topics regarding older adults and those who care for them. Discussing each, even listing them, would take several articles — and we found a great deal of inspiration at AiA18 for topics to address in coming months — so we are going to briefly discuss several of the major topic areas. There were 537 separate events on the AiA18 schedule so, no, we can’t begin to address all of them — nor could we attend many of them. Fortunately, we are able to get copies of many of the presentations we missed so can catch up on much of what we missed.

These are some of what we saw as the topic areas of greatest interest to family caregivers.

Seniors with Alzheimer’s Disease and Other Dementias

Alzheimer’s disease and other dementias will be a significant topic at Aging in America until a cure is finally found because of the impact on seniors and those around them.

We heard discussions of ongoing research toward cures — there are many ongoing efforts — and guidance for caregivers of those with dementia to help them give seniors with the disease the best life possible.

One innovative area about which we were pleased to learn is the development of memory cafes. A memory cafe is a safe environment created for those with dementia to socialize and make connections in a community of those with like needs. We expect to hear and write more about these in the future.

This is another topic area about which we often write at Senior Care Corner and which, fortunately, is getting much more attention in conferences and other venues. There is broad recognition of the essential roles of family caregivers and helping them fulfill those roles is important to seniors’ quality of life.

We were pleased to see the value of technology to the work of family caregivers discussed in sessions. There was broad acknowledgement of the importance of the human aspects of caregiving, with technology — especially in the future — seen as freeing up more of family caregivers’ time to spend with their senior loved ones.

With the senior population growing much faster than the numbers of potential caregivers, the reliance on family caregivers to meet older adults’ needs is only going to grow. Because of that, we anticipate seeing the focus on caregivers’ needs growing in coming years.

Diversity of the Senior Population

The diversity of the senior population is a multi-faceted subject that was woven throughout AiA18. We often talk about seniors not being a single homogeneous group and speakers at the conference really broke down many of the different segments, along with some of the needs and issues of those segments.

The point of discussing the diversity of seniors is to aid in understanding their perspectives and the problems that must be solved in order for each segment to have optimal quality of life.

Benefits (or Not??) of Technology for Seniors

Technology of all kinds related to the needs of seniors was discussed at Aging in America. Tech topics ran the gamut from push-button emergency response wearables to such things as the capabilities provided by smartphone technology, tele-health, smarthome technologies of all kinds, and more.

There were more discussions of the privacy issues associated with home monitoring, for example, with perspectives ranging from “no way” to “no problem” and the ways monitoring itself may evolve to address the concerns of many seniors while still enabling their ability to live independently longer.

As we discussed in our article during AiA18, we were left shaking our heads a few times at some of the perspectives on technology. We realize, though, the conference had a broad range of speakers with varying experiences with technology themselves. Our issues came when experiences and sentiments of one segment of the senior population, of a limited number of seniors, or of the speakers themselves were used to represent the whole body of older adults.

It was encouraging to see so many in the audience at technology sessions who were there to learn more about the benefits of tech for seniors and caregivers. Those people are important to the future of tech for seniors, both in the guidance they provide technology companies in developing and marketing of their products and in helping seniors understand the benefits tech can provide through learning about and using technology themselves.

There was much discussion at AiA18 of the politics surrounding meeting the needs of older adults, which we anticipated. It was, after all, a gathering of those motivated to address seniors’ needs and problems — exactly the ones most likely to be mobilized to press for political action. Protection of seniors from scams and financial abuse (often by those they trust) is another important legal area that received attention at the conference. Once again, there is too much to discuss in meaningful detail here so you can count on more in future articles.

With so much recognition on the important contributions of family caregivers, there is growing attention being given to the needs of seniors who are aging on their own for whatever reason.

These solo aging seniors, also called elder orphans by some, have their own challenges that must be addressed. This is an area we recognize as important and will discuss further at Senior Care Corner.

In addition to the many speaker presentations during conference sessions, many companies, agencies, academics, and others presented short topic discussions backed by posters, of which there were enough to fill a large conference room. We found that an innovative approach to giving exposure to ideas so captured some of those posters to pass along to you here.

The posters attempted to convey a lot of information in a small space so most had text too small to convey on even a standalone basis here, but we thought these would give an idea of the different topics represented and the work that went into them. Who Goes to Aging in America

The attendees at Aging in America 2018 were as diverse as the topics covered by the conference. There were women and men (okay, a lot more women than men) from local, state, and federal government agencies, non-profits, and businesses large and small at AiA18, as well as a number of family caregivers seeking to learn more.

Those we encountered included corporate CEOs, senior level government officials, agency directors, people working directly with seniors in the field, and more — all very committed to meeting the needs of seniors and caregivers.

One thing we noted at Aging in America was the age of the speakers, with many we encountered being seniors themselves. Many have been on the front lines of advocacy for the needs of older adults for many years. We appreciated their insights but are also looking forward to hearing what the next generation of leaders on senior issues will have to say.

While at Aging in America, we covered the What’s Next Boomer Business Summit, which is focused on individuals and organizations working in — or that want to work in — the aging marketplace. This was a day of presentations about the current and future older adult markets and doing business within those markets.

The Boomer Business Summit addressed what is increasingly being called the “longevity market,” the rapidly growing 50+ population segment. We’ve read and heard a lot lately about businesses recognizing this segment as the most lucrative market for products and services, given the spending power many older adults are taking into their senior years.

These are some of the topics included in the Summit.

As you see, there was a range of discussions at the Summit, with several discussing aspects of technology in the care of older adults.

Speakers included companies providing innovative technologies, providers of services built around technology, and even some expert opinions that seemed less than optimistic about the acceptance of technology by older adults.

It will be interesting to see how topics at the What’s Next Boomer Business Summit evolve as the longevity economy rapidly develops with the growing number of baby boomer retirees.

As is often the case when a variety of people are brought together, whether from across industries or different perspectives and roles on issues, differences in uses of terms can impact understanding and reaching common solutions.

One prominent example we encountered at Aging in America is the term “aging in place,” which is widely used to discuss senior living. It is an important term because a large majority of seniors and future seniors express a desire to age in place.

At Senior Care Corner, we use “aging in place” as applying to seniors’ ability to live in the home of their choice. That home may be the one in which they lived for many years and raised their families, a home into which they have downsized, or anywhere else they choose to live independently. While many in generations past lived in one home for 50 years or more, that is becoming less common, with families often living in multiple homes — sometimes in multiple states — before seniors reach their retirement years.

Some we encountered at AiA18 defined aging in place more narrowly, as seniors living in the same homes for as long as 50 years, or even longer, in communities that had evolved to the point where they may no longer be suitable for residences, particularly those of older adults with mobility challenges.

Understanding how a person is using a term can make it easier to understand the position they are taking. For example, while aging in place may be appropriate for a high percentage of older adults under the first definition, it may make less sense under the second.

Definitional differences such this can also impede advocacy efforts. After all, when politicians encounter those advocating for the needs of older adults using key terms in different ways, it may make it more difficult for them to understand the arguments being made – – and easier to avoid taking the desired action.

This was the first time Senior Care Corner covered Aging in America — and certainly not the last.

There was a lot from which family caregivers can benefit, with only the tip of the iceberg discussed in this article. We look forward to following up on many topics from the conference and bringing it to you in future articles.

We are already looking forward to AiA2019!