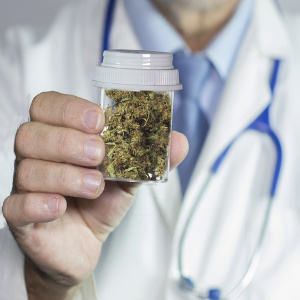 The American people are divided about the use of medical marijuana, as are the nation’s doctors.

Researchers are beginning to come to press with their results about the efficacy of this treatment for people who have Alzheimer’s disease.

What will the research tell us?

If it is found to be helpful, just how helpful will it need to be before your senior would agree to trying it?

Would they refuse to use it, no matter its performance, due to philosophical reasons or concerns over its long term effects?

Marijuana as a Chemical Compound

There is a preconceived notion about marijuana stemming from the sixties when ‘hippies’ were using it, along with other mood altering drugs, to escape from life’s realities. Actually, cannabis has been cultivated for the past 6000 years.

Marijuana, or cannabis (also referred to as hemp), is a complex plant with compounds that exert effects on our body systems. It includes the dried flowers, leaves, stems and seeds containing compounds that produce mind-altering effects and have potential medical benefits.

Our body has a neurotransmitter system, called the endocannabinoid system, which is found in the brain and body. People are affected by the cannabinoid compounds differently.

We have likely heard about one active compound in cannabis – delta-9-tetrahydrocannabinol (THC), but there are other active compounds exerting their affects. Marijuana users often want a plant that has a high THC content in order to maximize its physical affect. Different variants of the cannabis plant have been grown to achieve this.

Depending on the variant, undesired outcomes can be associated with marijuana use including depression, anxiety, and psychotic illness.

Medical marijuana use has been prescribed to treat pain, nausea, vomiting, and AIDs-related loss of appetite. Its benefit is found in smoked form as it gives a rapid effect when smoked.

The Food and Drug Administration has approved two medical marijuana pills – dronabinol and nabilone — that are being used for nausea from chemotherapy and decreased appetite in AIDS.

Most experts agree that more research is needed before it is widely prescribed as the current evidence of its effectiveness is largely anecdotal.

At present, many advise a close look at risk versus benefits depending on how it reacts in each individual.

Alzheimer’s disease is a neuro-degenerative condition that is associated with neuro-inflammation and oxidative stress.

How cannabinoids can give a neuro-protective influence and potentially mitigate the symptoms of neuro-degenerative conditions is now being studied.

Scientists examining the brain of Alzheimer’s patients have reported that components of the cannabinoid system were affected. It is thought that cannabinoids could protect neurons from beta amyloid and reduce tau.

A body of evidence has accumulated to suggest antioxidant, anti-inflammatory and neuro-protective roles of the cannabinoid system which could help those diagnosed with Alzheimer’s disease.

One study indicated cannabinoids may assist in transporting amyloid accumulation out of the brain, which could slow the disease progression.

Looking for Cause & Effect Relationship

At this point there is no evidence a cause and effect relationship exists showing that cannabis use improves symptoms or slows progression for patients with Alzheimer’s disease.

There is evidence, however, cannabinoids have neuro-protective actions.

Use of medical marijuana may be helpful in treating the symptoms associated with Alzheimer’s disease, such as sleep disturbance and depression.

For the time being, more research is being done about the actual benefits that can be derived for those with Alzheimer’s from the use of medical marijuana, what dose is required, which form is best, and what potential side effects may occur.

There is no consensus there is a benefit for anyone with dementia to use cannabis, but the future may give us new hope for this as a treatment to slow its progression and relieve some symptoms.

There is no cure for Alzheimer’s disease (yet) but there are some medications that are being used to help treat cognitive loss.

Drugs that impact the buildup of plaque in the brain can be used depending on the stage of the dementia. Their goal is to slow the progression for a period of time.

There are also new treatments that could help those diagnosed with Alzheimer’s.

Because there is not enough definitive data linking something specific, such as drugs, diet, activity or stress relief, that can be done to stop or delay Alzheimer’s disease, many researchers have shifted their focus to finding ways to prevent Alzheimer’s disease.

It perhaps will be found that it is easier to prevent it than it is to stop it once a person has it.

Discovering clues to prevention of Alzheimer’s disease such as lifestyle changes, environmental factors, a vaccine or genetic testing will definitely be a focus of researchers in the future.