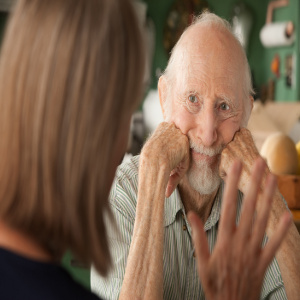 Under even normal circumstances, being a family caregiver can be tough.

Caring for someone with Alzheimer’s or other dementia increases the caregiving challenge.

Those caring for a loved one with dementia have to overcome behaviors that can be difficult to manage including aggression, confusion, wandering, inability to communicate and reasoning with the person with dementia.

These added challenges can be a cause for frustration, stress and fatigue for family caregivers.

If you are the child of the person with dementia, you are also concerned that you might be genetically predisposed to also having dementia and seek ways to prevent it from occurring to you or your children. This is a definite added stressor.

We know that the numbers of caregivers are quite high and climbing every day. Caring for someone with Alzheimer’s disease and dementia is beginning to affect more people as well.

Let’s see what help might be on the horizon for those who care for seniors with Alzheimer’s and other dementias.

More than 5 million families confront caregiving responsibilities for a person with Alzheimer’s disease and this care can result in health problems for these hardworking caregivers.

A recent study has investigated the toll this level of caregiving takes on the primary family caregiver and the results are a bit disturbing.

Watching the progressive effects of Alzheimer’s on your senior loved one can mean changes for the caregiver. It can be hard to watch someone you love change before your eyes and become increasingly dependent on you for care.

Researchers from Duke University, Johns Hopkins University and Utah State University found that caregivers who are caring for someone with dementia are six time more likely to be diagnosed with Alzheimer’s disease too!

Researchers feel that the link may be that caregivers and the person with dementia have lived with the same lifestyle factors that may contribute to dementia including activity, diet, and stressors which are then combined with the additional stress of caregiving.

Caregivers also forget about themselves — or simply ignore their own needs — as they focus their time and attention on the well-being of their senior loved ones. They stop putting a priority on their own health needs, stop finding ways to relax, and don’t often get the nutrition or exercise that is so important to cognition and quality of life.

There are often two schools of thought about a dementia diagnosis. You either don’t want to know because you can’t alter the course or you want to know as soon as possible to make plans and make the most of your time together.

In order to learn as early as possible so that you and your senior loved one can make changes in lifestyle, get documents and wishes in order, improve your home for aging in place and do whatever they would like to do before their cognition impairs their quality of life, it is important to get as early a diagnosis as possible.

The earlier you know the diagnosis, hopefully new treatment or clinical trials promising hope can be initiated and be more effective.

There are several ways doctors can make a diagnosis if dementia or Alzheimer’s disease is present, unlike in years past when an autopsy was the only viable way to confirm the diagnosis.

New Drug Could Be a “Game Changer”

Currently being tested in clinical trials with people who are not yet exhibiting symptoms of Alzheimer’s disease but who have been deemed at risk for the development of dementia due to the buildup of amyloid plaques seen under brains scan is a new drug that has been called a game changer.

This new treatment for Alzheimer’s dementia may slow down or even prevent Alzheimer’s disease, according to researchers of the A4 Study.

The drug is called Solanezumab and trials are underway with, hopefully, exciting news for treatment of dementia.

Currently there are five FDA approved medications that are used for the symptoms of Alzheimer’s but they are temporary and don’t treat the cause of Alzheimer’s. It is currently the only cause of death in the top 10 that can’t be prevented, slowed or cured.

There is a great deal of research currently taking place targeting drugs that will attack the causes of Alzheimer’s disease and not just treat the overt symptoms.

Create an Individualized Plan for the Future

The Alzheimer’s Association has a link on their website called Alzheimer’s Navigator. On this site you can map out a plan of action when you face Alzheimer’s disease.

Here you create your own personal plan. There are guides for the information you need to make informed choices, support for the caregiver, home safety and accommodations, how to help with daily caregiving tasks and much more.

It can help connect you with the support and services you need to make your personal journey a little easier.

The more we know and learn through research and clinical trials will benefit those with dementia and their caregivers.

We will be on the lookout for future advances, clinical trials and new treatments as they continue to be released.