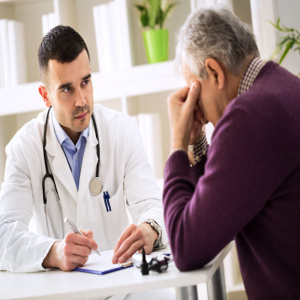 Would you want to know the risk you or your loved ones will develop Alzheimer’s dementia?

Alzheimer’s disease has a major impact on families.

At this time, there is no cure for Alzheimer’s.

It is the US’s 6th leading cause of death and more than 5 million people are currently living with Alzheimer’s disease.

Unfortunately, 1 in 3 people will die with Alzheimer’s disease or related dementias.

The goal of early detection is finding and beginning treatment and lifestyle changes that can slow its progression.

Finding strategies that help you and your family cope with the progression of memory loss can improve the quality of life, not only for the family member with Alzheimer’s but also the rest of the family, especially the family caregivers.

Researchers at the University of California at San Francisco’s VA Medical Center have developed a tool that has been shown to be 87% accurate at predicting the onset of dementia within six years.

Using a series of questions, with no equipment needed, it can be administered in the doctor’s office. The doctor will review medical history, physical status, and cognition during the evaluation.

Risk factors are 70 years or older, poor scores on standard cognitive tests, history of coronary bypass surgery, slow functioning on everyday tasks like buttoning a shirt, non-consumption of alcohol and a body mass index less than 18.

This scoring system allows doctors to tell a person if they are at low, medium or high risk and follow up with their care according to the level of risk.

At this time there is still no tool that will prove that a person has dementia, it is subject to testing based on assessment protocols, risk factors and observed symptoms.

Assessment is based on a person’s medical history, neurological exam, medical exam, mental status testing and imaging of the brain.

Here are the signs, from the Alzheimer’s Association, for which you can look to be present in your loved one if you suspect the beginning of Alzheimer’s disease.

If your loved one has one or more of the above signs, contact your physician to discuss what it means and options for treatment.

Through research, it has been found there are certain genes that can increase the risk of developing Alzheimer’s disease.

Most healthcare professionals do not routinely recommend testing for these genetic markers because they indicate risk not certainty of developing the disease.

Some companies have been marketing home screening tests.

Most experts agree that these tests should not be used to replace a complete evaluation by a healthcare professional.

There is no current valid biomarker test available but research into beta-amyloid and tau levels in cerebrospinal fluid (CSF) is underway and could hold promise.

Research suggests Azheimer’s disease in early stages may cause changes in CSF levels of tau and beta-amyloid, two proteins that form abnormal brain deposits strongly linked to the disease.

Measuring the amount of these proteins is a key indicator for diagnosing the disease but a standard procedure is still under study.

Another course of investigation is testing blood and urine levels of tau and beta-amyloid proteins as well as changes in the eye. Detecting the presence of these proteins throughout the body is one course of research currently funded by the Alzheimer’s Association.

MRI and CT scanning are often used to assess for Alzheimer’s disease and rule out the presence of other diseases that produce symptoms such as tumors or fluid buildup.

Molecular imaging tracer studies allow a chemical to bind with amyloid plaques in the brain and visualize more clearly a characteristic trait of Alzheimer’s.

People who have been diagnosed with MCI are shown to have a significant increased risk for developing Alzheimer’s within a few years compared to people with normal cognition.

However, not everyone with MCI will develop Alzheimer’s and their cognition will not worsen over time.

Research into ways to prevent or delay the onset of Alzheimer’s as well as early detection is increasing rapidly.

The goal of early diagnosis is to provide treatment in the hope that strategies for future treatment can begin before irreversible damage to the brain occurs.

The number of people diagnosed with Alzheimer’s disease by the year 2050 is expected to reach 16 million so we will all be touched in some way by this disease.

Some people may prefer not to know, but knowing gives you power to cope!

Until there is a cure, increase your knowledge and get support to help you plan for and manage the changes your loved one and family may be experiencing.