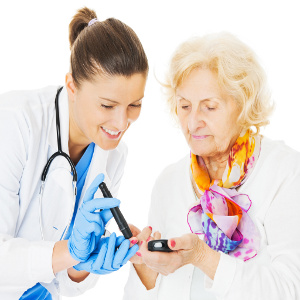 More information has been coming to light through research that links diabetes and dementia.

We are uncovering information regarding the contribution high blood sugar makes on the death of nerve cells in the brain.

Does diabetes cause dementia?

Does dementia cause diabetes?

Is there something specific to lifestyle choices that predispose a person to both?

Can we prevent either?

Are family caregivers of a person with dementia more at risk for developing diabetes or dementia?

These are all questions, and there are still more, that family caregivers would love to hear answered when they care for aging seniors.

Most people would be happy to make some changes in habits, activity or diet that could prevent either of these diseases in our senior loved ones or even themselves. But what is really known or is it all just speculation at this point to grab headlines?

A study recently published in Neurology found that people who were diagnosed with Type 2 Diabetes had a greater number of tangles in the brain, even in the absence of a diagnosis of dementia.

An increase in tangles could increase their risk for developing Alzheimer’s disease, according to researchers.

The researchers of this study are quick to say the appearance of more tangles in those with diabetes does not indicate if the diabetes or high blood sugar was the cause of increased formation of these brain deposits.

Obesity may also contribute to the formation of tangles especially since many people with Type 2 Diabetes are also overweight.

There is also a potential that chronically high blood sugar can affect the circulatory system, especially in the brain, that can also lead to these tangle accumulations.

Researchers of this study encourage better control of blood sugar to help prevent tangles from being formed. One suggestion is that sugar molecules in the blood attach to protein resulting in the tangles (glycation).

It has also been shown that those with diabetes are at twice the risk of developing dementia but the exact cause is unknown.

Another possibility that can increase brain deterioration leading to tangles is inflammation found throughout the body.

There was a surge in information that the brains of people with Alzheimer’s disease were highly similar to those with diabetes.

When researchers further examined the cell structure they found that insulin resistance and insulin deficiency in the brain was a precursor to Alzheimer’s neurodegeneration.

One study pursued this line of investigation, as there has been conflicting data as to the impact of metabolic syndrome and obesity to this neurodegeneration and insulin may not be the only cause.

Researchers looked at post mortem brains of those with Alzheimer’s disease examining them for various abnormalities.

They have concluded that the term “type 3 diabetes” accurately reflects the fact that Alzheimer’s represents a form of diabetes that selectively involves the brain.

Insulin Produced by the Brain, Too

Other researchers from Brown Medical School found that insulin is produced by the brain in addition to the pancreas. Obesity has a role to play in insulin resistance in the brain as well but they felt it was a modest contributor.

Type 2 diabetes was also felt to be a factor. In itself it’s not enough to cause Alzheimer’s disease but could encourage its progression.

Brain impairment as a result of insulin resistance was also influenced by inflammation, oxidative stress, and cell dysfunction.

What does that mean – type 3 diabetes? These researchers felt that there is a specific form of diabetes mellitus that afflicts the brain and that cognitive improvement can be seen when the person is treated with intranasal insulin.

If a person has insulin resistance such as those with Type 2 diabetes, the increased risk of Alzheimer’s disease is 50-65% greater.

Other researchers found that poorly controlled blood sugar was linked to poor performance on cognitive tests administered. They will need to study whether these people could have improvement in their cognition once their blood sugars were controlled with disease management strategies.

According to the available data, it appears there is a connection with insulin resistance, diabetes, blood sugar control and dementia. Obesity is part of the problem too.

If people can control their blood sugar, get to a healthy weight, be physically active and be aware of the risk for diabetes and get tested as needed, there may be some dementia cases that could be prevented or their progression slowed down.

It is possible to reduce the risk for dementia and diabetes with appropriate diet and lifestyle changes.

Here are some recommendations for all of us to incorporate to prevent health problems:

Some researchers point out the fact that ‘junk’ food is not good for the brain and may contribute to insulin resistance in the brain, worsening Alzheimer’s disease (type 3 diabetes).

Diabetes has not been shown to cause Alzheimer’s disease but they are now both thought to have the same connection – insulin resistance.

Future investigation will continue, with more information forthcoming to help us all understand the impact our overall health has on dementia.

This is just more fuel on the fire encouraging us all to eat better, become more active and engage our brains.

Family caregivers can encourage their senior loved ones to make changes because it is never too late to protect our brains!