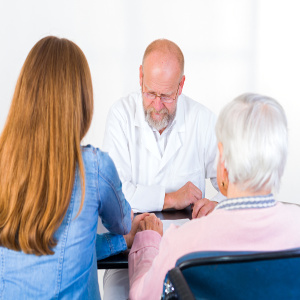 A new report by the Alzheimer’s Association has brought some sobering statistics to light.

Statistics that should prompt discussions among seniors, their families — and maybe their doctors.

What would you want for your loved one, family member or yourself if there was medical information to share?

Should the fact that there is no cure for Alzheimer’s disease right now mean that it isn’t important to know the diagnosis?

Would you want the doctor to try to protect your senior loved one by not telling them the truth of their diagnosis or tell them details in an unclear way so that they don’t understand the impact of the diagnosis?

Is it acceptable for the healthcare team to make that decision? Do we have a right to know?

Should the doctor be mandated to tell everyone the truth of their diagnosis? What is their ethical or even moral obligation to a patient?

What if your senior was told but couldn’t recall ever being told?

Facts and Figures Report for 2015

There is a new section in the Facts and Figures Report for Alzheimer’s 2015, Disclosing a Diagnosis of Alzheimer’s Disease, that contains an historical look at telling patients the truth about medical diagnosis as well as specifics about the dementia diagnosis.

The very first line in this section states fewer than 50% of those with Alzheimer’s disease were told their diagnosis. This is based on the Alzheimer’s Association’s commissioned study using Medicare Current Beneficiary Survey (MCBS) information from Medicare claims made for those with a diagnosis of dementia.

A question on the claim survey “Has a doctor ever told you that you have Alzheimer’s disease?” was tabulated. It showed that only 45% diagnosed with Alzheimer’s answered that they had been told their diagnosis and even fewer (27%) with other causes of dementia.

When doctors were polled, many reported that they would disclose the diagnosis of dementia to the caregiver (healthcare proxy) not the person themselves. This could be related to the stage at which the disease is diagnosed.

Most organizations dealing with brain health agree that the person involved should be told the diagnosis in a manner that is clear to ensure understanding. The only exception is if the person has already expressed wishes not to be told.

If the person is in later stages, a cognitively intact caregiver should be told so that safety precautions and appropriate care of the person newly diagnosed with dementia can be initiated.

Disclosure of a diagnosis of Alzheimer’s disease and other dementias is actually a goal of Healthy People 2020 because being informed is so important.

Another finding in this report was the disclosure was often based on independence versus disability. If the person diagnosed had a disability, they were more likely to have a disclosure of their diagnosis by the doctor. The more impairments in activities of daily living, the greater the percentage of disclosure to the person was made.

This is in contrast to the thinking that the more severe stage of dementia and the potential for loss of memory of the disclosure is the reason doctors don’t disclose or that patients fail to recall the disclosure. The findings show that the more impaired a person, the more likely they will get a full disclosure.

With a truth telling approach, the thinking is that there is more harm than good that comes when the diagnosis is not fully disclosed.

In the past the fear of losing hope was one reason to withhold a diagnosis but now we realize we are capable of coping.

Reasons for Non-Disclosure of a Dementia Diagnosis

There is no way to accurately pinpoint the number of people who are not told due to memory issues or lack of understanding the information provided to them. However, it is clear too many are not getting the diagnosis they should by the healthcare team.

Reasons why some healthcare providers don’t disclose the diagnosis:

Despite the fact that many are not getting full disclosure from their healthcare providers or are choosing not to get the information, there are real benefits to knowing as early as possible that you have dementia.

You and your senior loved one can seek treatment, clinical trials, information, strategies for coping with the disease, complete legal documents, make financial plans and make the most of the time together when capable of making lasting memories for the family.

Knowing the diagnosis allows family caregivers to provide care in a way that will make life as pleasant as possible for their senior loved ones.

One person with dementia said:

“People can overprotect you,

which robs you of your independence much quicker.”