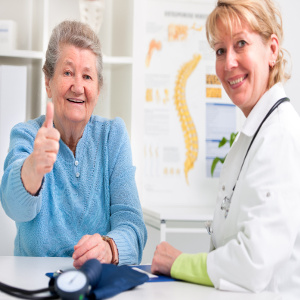 As our population continues to age, more will become victims of chronic diseases. Many family caregivers of older adults have encourage senior loved ones to take steps in their lifestyles to prevent or lessen the likelihood of developing chronic diseases.

Good news! It appears our efforts seem to be paying off, great results are coming from making the positive improvements that we know we should.

Good news also comes with bad news. In this case, the good news doesn’t mean that we can stop being healthy and doing the right things to maintain our health.

Yes, the bad news is that we still have to keep moving and eat a balanced diet! Not really that bad, after all.

A recent report celebrates the findings that in the last twenty years, the rate of strokes in seniors has dropped 40% in Medicare patients over 65. This includes both types of stroke – ischemic and hemorrhagic.

That is something to celebrate!

Even better news is that death from stroke also declined during this time frame.

This is especially good news, as stroke is the fourth leading cause of death and treatment after stroke is time consuming and costly.

Researchers found that, even though diabetes is on the rise, cigarette smoking, measured systolic blood pressure, and total cholesterol values have decreased, which all have contributed to a decline in stroke. At the same time, the use of statin drugs to lower cholesterol and anti-hypertensive medications have increased greatly, also contributing to the reduction in cases of stroke.

Researchers have shown that in developed countries including the United States and Germany, the rate of new cases of Alzheimer’s has decreased.

Since the late 1970’s, the rate of dementia diagnosis was 44% lower. The sharpest decline was seen among people in their 60s.

Why is this happening? Researchers postulate that the improvement in cardiovascular health has led to a reduction in dementia because a healthy heart allows for blood to carry oxygen and even energy to the brain. They also refer to the cognitive reserve theory to explain that the more education a person has can help their brain adapt to Alzheimer’s changes. They also feel that staying mentally stimulated throughout the aging process also allows for the brain to compensate.

In the midst of this decline in new diagnosis, the fact is that millions of Americans have Alzheimer’s disease, the sixth leading cause of death in the US, which has no real treatment or cure at this time.

Researchers continue to focus on protein buildup in the brain and how it leads to Alzheimer’s disease. Proteins such as beta amyloid and tau have been studied for some time but a new protein called TDP-43 has been found during autopsies of a large number of those with Alzheimer’s disease. This may be a new piece of the puzzle. It is currently unclear if this new protein is a cause of Alzheimer’s or a consequence. This protein has been linked to ALS or Lou Gehrig disease.

Another new development is the potential for blood testing to predict the diagnosis of Alzheimer’s disease. Scientists from Britain have identified 10 blood proteins that they say can predict with 87% accuracy whether someone with early signs of memory loss will develop Alzheimer’s disease within a year. They feel that diagnosing the disease earlier before the brain is damaged will lead to not only better treatment but an ability to find a cure through clinical trials of these individuals without brain involvement/damage.

There has been some resistance to knowing a diagnosis that early in the disease if you are affected, but the hope for a cure and the ability to treat it earlier may be worth the stigma for us all. The test will not be available soon as they need to increase the rate of accuracy before it can be implemented.

We should continue to see more research into a cure for Alzheimer’s disease due to the National Alzheimer’s Project and the Alzheimer’s Accountability Act, which represent a bipartisan effort to ensure that Congress gets the information they need to set research funding amounts for the budget each year. Their goal is to effectively treat and prevent Alzheimer’s by 2025.

Chronic Disease on the Decline

In addition to Alzheimer’s and stroke, another disease that statistics show has taken a much anticipated decline is cancer. Annual statistics from the American Cancer Society shows the death rate from cancer in the US has fallen 20% from its peak in 1991. This decline could mean that 1.2 million cancer deaths were avoided.

Researchers feel that the decline in cancer deaths is attributable to a decrease in smoking and early detection efforts. While many cancer sites are declining some continue to be higher than desired including melanoma, liver, thyroid and the pancreas.

There is good news for chronic disease prevalence and lowering death rates but this doesn’t mean that we need to stop trying to stay healthy.

We need to continue to help our seniors make as many positive changes to their lifestyle as they can in order to prevent chronic diseases so that they can lead an independent life as long as possible.

We need to do the same so that we can continue to be caregivers.

We know that eating right, sleeping well, getting physically active, stimulating our brains, reducing our stress, participating in preventive health screenings and following our current medical treatment plans will help our seniors live a longer, healthier and happier life. Let’s do it together!