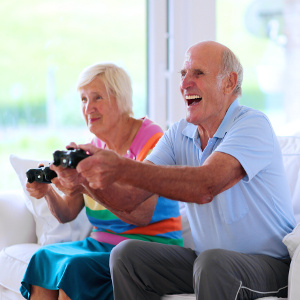 Many of our seniors didn’t have a lot of experience playing games — at least not the games our kids play today.

Kids can play games anywhere and anytime (sometimes it seems like all the time) using a variety of consoles, computers and mobile devices.

Guess what – so can our senior loved ones!

There are benefits to gaming that could mean it is time to introduce your senior to games that will give them enjoyment, brain stimulation and connections to others.

It’s also a great way to gain comfort with the digital technology that can mean so much to their lives in other ways.

New Study About Gaming Over 50

AARP partnered with the Entertainment Software Association to survey almost 3,000 people over 50. Their ages ranged from 50 to over 70 with a mean age of 63 years.

They were asked questions about how often they game, what devices they use and what their attitudes were toward playing games.

It turns out our seniors are playing games more than you might imagine.

A gamer in this study is a person who has a tech device or system that they personally used at least once a month to play a game.

Four in ten adults over 50 are considered gamers.

The majority of those surveyed, 59%, are using their computer or laptop to access games.

However, many are using mobile devices to play games.

This report also found that senior gamers don’t play just once a month, but as often as weekly, with three quarters stating they play that often. Four in ten say they play every day.

It might be surprising to us to learn that, in fact, more seniors over 60 are gamers compared to younger seniors. 43% of those over 60 play daily compared to 37% of those 50-60 years old.

Older gamers are playing an average of 5 hours a week. Those using a tablet seem to play longer than those using a smartphone or game console.

Seniors polled in this survey stated a preference for specific types of games.

Card or tile games such as solitaire were played by the majority of respondents at 46%.

Next more often played games included puzzle or logic games by 44% of those asked.

Other games seniors enjoy include trivia, word games and traditional board games.

The older the person, the more likely they were to play card and tile games.

Who’s Getting Them Connected?

You may find it surprising that most seniors are purchasing their own games according to their own desires.

77% of them report buying their own games in the past six months.

Many seniors also purchase games for others.

Why Do They Want To Play?

What do our seniors feel is the ultimate reason for playing online games? Most will say simply to have fun.

However, if those seniors are over 70, they report mental stimulation as the main reason they play games. The expect to stay mentally sharp when playing these games.

Gamers more often respond that games will help them improve brain health compared to those seniors who don’t play games.

They play most often between six and nine PM, but will play any time of the day.

Most seniors aren’t connecting with others when they play, as 86% report that they play alone. However, most report their children or grandchildren are major influencers of them being gamers. They teach them to play, advise them on which games to purchase and help them with new technology.

It is interesting that older gamers have played games on and off since they began playing video games, most often in their 30s.

Not only do they wish to play for fun and brain stimulation, seniors report gaming relieves boredom, allows them to spend time with their family and friends, challenges them mentally, teaches them something new, keeps them healthy and gives them a connection.

Where Are They Playing ?

By and large, seniors play games at home.

They may play on devices they themselves own or owned by someone else in the home.

89% of those seniors asked report that they own a phone or other mobile device. 42% say they have a regular phone while about 25% own a smartphone (either Android or IOS). The phone used for gaming is an even split between iPhone and Android devices.

However, not all seniors use their phones to play games. They also use other tech devices.

Many also report tablet ownership themselves or someone in the household as well as portable digital music players and smart watches.

For gaming, they are using phones and mobile devices such as tablets at 57% and video game consoles at 15%.

Only 22% of the respondents reported owning a game console such as Wii, Xbox, or PlayStation. A Nintendo Wii tops the models seniors own. Some (6%) also say they own a portable game such as Game Boy Sony PSP or the most popular Nintendo DS.

Other systems reported as being used by seniors for game playing include Apple TV or Plug and Play, but the numbers of owners/users is low.

It seems that they aren’t connecting to WiFi when playing, as 41% report not accessing WiFi. Of those who do connect, laptops are the device of choice.

What About the Seniors Who Don’t Play?

Seniors who report that they don’t play online games, say they find them boring.

Many in this group feel that they are for younger people, not them.

A few report fears of security and privacy when online.

Others are just unsure about the technology and don’t know how to access it.

Seniors get many benefits whether they realize it or not while playing.

Family caregivers of those not yet playing games might want to introduce some gaming into their life to give them an opportunity for improved socialization, mental stimulation and FUN!