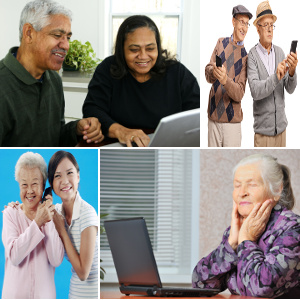 It’s both exciting and overwhelming to try (I said ‘try’) to keep up with the technology innovations for aging in place.

As family caregivers, we want the best — and to do our best — for our senior loved ones who are living independently and are convinced technology innovations will be a big part of that.

In order for the tech of the future to benefit seniors, though, they will have to be comfortable making it part of their lives. That’s part of where today’s technology comes into play.

Reporting on Seniors and Soon-to-Be Seniors

While the information in the Study is useful, we wish the information presented including additional age groupings, rather than reporting results for all older adults in the 55+ bracket.

While CTA research reflects what is desired by its members, we think the tech industry — and seniors — would be better served if the 55+ population was separated into additional groups.

As it is, the Study’s reporting for the 55+ age group includes both seniors and future seniors — as well as many family caregivers.

Now, on to the results…

The Study reflects increased technology adoption by the 55+ group, as it has the past several years.

Just as important, maybe more so, in many categories tech ownership by older adults looks more like that of younger age groups.

Why is that important? As technology companies see those results, their view of the market potential of older adults should be rising and, with it, the future of technology solving the problems of seniors.

According to the CTA Study:

We found interesting a few sets of technology ownership statistics for older adults.

Sparing you further statistics, it is nice to see growing numbers of older adults expect to buy smarthome devices such as smart thermostats, appliances, speakers, and more.

Overall, the Study provides a lot of reason for optimism regarding technology adoption by the seniors of today and tomorrow.

A quarter of older adults still don’t have access to the internet. While that doesn’t lag too far behind the general population, this is one case where that’s not good enough.

Access to the internet is key to many of the benefits independent-living seniors can and will realize from technology, just as web access is important to those of us of all ages.

The connections to family, friends, community, healthcare professionals and more that are enabled by the internet can be particularly important to avoiding isolation for seniors who, for whatever reason, don’t get out of their homes as much as they once did.

So, no, learning that “only” a quarter of seniors lack internet access is not a good thing. We have to do better.

Some of those seniors may not see a need for internet access. Hopefully we can demonstrate to them the benefits they are losing.

Unfortunately, we suspect many of the quarter going without are due to living in areas without access, as is the case in some rural communities, or a matter of cost. After all, seniors who are having trouble buying medications and putting food on the table (as is the case with far too many) likely don’t have money for broadband or cellular internet service.

Whether it’s location or money, that’s a situation we have to find a way to change, not just for seniors but the population as a whole. Just as lack of electricity held back many families in years past, so does lack of affordable internet access now and more so in the future.

We appreciate CTA reporting on this important statistic, but are hopeful internet access becomes universal so it never again has a place in studies like this one.

Follow us here at Senior Care Corner® for updates on technology for our seniors — and for us as their family caregivers.