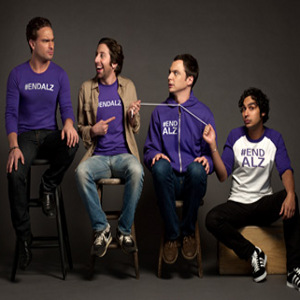 September is World Alzheimer’s Awareness Month. There are 35 million people affected by dementia, as are their families, around the world. A world-wide effort is needed to stop it!

Senior Care Corner is a strong supporter of the fight to end Alzheimer’s, as are such high profile people as the cast of the Big Bang Theory (picture via the Alzheimer’s Association). We love the show and are pleased to see the actors using their popularity to help raise awareness.

Each Tuesday this month we’ll present an Alzheimer’s topic to help increase awareness and support for the cause.

Our week one topic is Alzheimer’s Awareness & Understanding.

Alzheimer’s Disease – What is It?

Much is said about Alzheimer’s Disease and everybody by now has heard about it, but does everyone really know what it is?

The statistics are quite astounding and especially shocking when we remember that those afflicted with Alzheimer’s have no cure for the disease and few treatment options.

Today, there are no survivors of Alzheimer’s. If you do not die from it, you die with it! (Source: Alzheimer’s Association)

Join us as we support the fight to End Alzheimer’s Disease!

We invite you back next week to check out our next Topic and encourage you to find ways to join the cause!