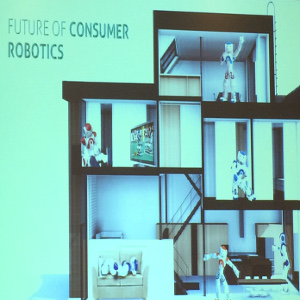 “A robot in every home” seemed a rather far-fetched idea to most people when Bill Gates wrote an article of that name published by Scientific American in 2006.

While it may seem just as remote a possibility to you today, we see it as something likely to happen in the lifetime of many baby boomers.

The idea of a robot for functions throughout the home, as depicted in the image above from an informative presentation at CES 2015 by Alison Sander of Boston Consulting Group, seems less far-fetched all the time.

Now, we’re not necessarily talking about robots with all the functionality of Rosie, who took care of George and his family in The Jetsons (that’s a boomer reference, for those not familiar).

Many would count the millions of Roomba vacuum cleaner robots as part of that goal. While they are technically robots, we seem them as just the start of something much bigger.

The optimism we’ve held for the future of robotics and what it can mean for aging in place seniors was reaffirmed and even heightened with what we saw and heard at the 2015 International CES. In fact, there are already robots (telepresence) that can help seniors live independently even longer in the home of their choice. Their functionality is not what will be available in the future – a future that is likely not too far off.

One that impressed us is the Beam+, which lets distant family caregivers come about as close as possible to being with their senior loved ones. We see that providing benefits to many families.

The $2,000 price tag for the initial Beam+ will be out of reach for most, at least until you compare it to the cost of in-home caregivers some might avoid – or the peace of mind it can provide to families uncomfortable with strangers in the home of their loved ones. It is certainly less costly than facility placement and loss of their beloved home.

One thing we’ve learned about technology is that it often goes far beyond the bounds of what we think it’s capable of doing.

How many of us would have imagined ten years ago the functionality we would get from our smartphones today?

Going back to the aforementioned Rosie, it is not unreasonable to think robots will be able to perform housekeeping tasks for seniors since we saw one at CES 2015 actually washing windows.

Think of what that can mean to family caregivers, who could spend more time in activities with their senior loved ones – and maybe even in looking after their own needs.

One of the reasons we are so positive robotics will have a real impact on aging in place is that the developers of robots and their investors believe it. The needs of seniors are not an afterthought in robotics development but actually front and center in their thinking.

One of the more impressive things we heard about robotics at CES 2015 is just how quickly advances in technology are possible. While it’s not in consumer robotics, an example presented in one of the conference sessions showed just how quickly innovation can be achieved. OSHbot is an autonomous service robot being introduced by Lowes Innovation Labs through a partnership with Fellow Robots. It is designed to help customers find what they are seeking within a store and link them with experts should they be unsure just what they need.

As impressive as we found OSHbot, we were amazed to learn that the time from initial conceptualization to readiness for store service was a mere ten months.

Yes, we see real benefits for seniors from in-home robots within the lifetime of most boomers – and don’t think we are being overly optimistic in doing so.

More on Robotics to Come at Senior Care Corner

Senior Care Corner has been following robotics advances for family caregivers for a few years now, but until now the possibilities have seemed to be further in the future.

Our optimism about the robotics field in general and especially the focus we see on designing devices that support aging in place seniors seem to justify bringing you more frequent updates, which we plan to do.

Just think about the possibilities of a robot in every senior’s home and what it can mean to their lives as well as the lives of family caregivers. We are and that’s why we are so excited about robotics.