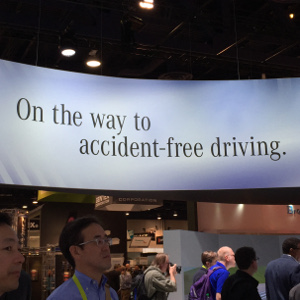 When your organization’s CEO arrives for the keynote address of your annual international event in a driverless Mercedes, you might be excused if you forget he’s CEO of the Consumer Electronics Association.

Until you remember what makes that Mercedes driverless, that is.

Between the buzz surrounding the 2015 International CES and the high profiles of many of the automobile exhibits around the Convention Center, it may seem like an auto show at times.

Then again, CES is first and foremost an innovation event and there is a lot of terrific innovation in the automotive industry.

Cars No Strangers to Electronic Innovation

Cars and electronics have long gone hand-in-hand, as many a baby boomer who fondly remembers their 8-track tape collection can attest. Sound systems for cars now rival (some will say top) the finest home systems, but there is much more innovation associated with the cars of today and tomorrow.

As important as those innovations are, though, the spotlight for CES 2015 seems locked on the autonomous, or driverless, cars.

Driverless cars, driven and navigated by computer, seem to be an answer to a lot of our traffic problems. Computers, after all, aren’t distracted by texting, eating, dealing with children in the back seat and the many other factors that draw the attention of today’s drivers.

Not everyone sees it that way, however.

Regulations in many states make on-road testing of driverless cars difficult. Even that, though, is better than in Europe, where laws require all vehicles to be driver-controlled.

Anyone who’s had their computer screen freeze up or had an app on their smartphone suddenly shut down could understandably be concerned about computers controlling a ton of vehicle travelling more than a mile per minute on the highway.

Then again, many of us see drivers each day we would rather see replaced behind the wheel by a digital substitute.

Statistics reflect human error as the cause of 97% of traffic accidents today. Computers would eliminate virtually all those errors from the equation, saving countless lives.

Some experts think addressing the concerns and regulations that constrain driverless cars could keep them out of consumer use for ten years or more, well beyond the readiness of the technology.

Benefit of Driverless Cars for Seniors

Many a family caregiver worries about senior loved ones getting behind the wheel of their car out of concern for safety due to diminished capability.

At the same time, being able to drive themselves to the places they need to go is key to emotional and actual independence for many of our older loved ones.

With access to public transportation being an option for fewer seniors all the time, driverless cars would seem an ideal alternative to having to rely on getting rides from friends and family for shopping trips, visits to the doctor’s office and more.

Even the best computers (so far, at least) are only as capable as the programming they’re given. It’s the programming – and the confidence the community has in it – that will make or break driverless cars.

Unlike operating systems or smartphone apps, the algorithms in control of our cars need to be virtually perfect from the minute we get behind the wheel. When we are going down the road at high speed, we probably don’t want to get a message our car’s control system needs an update.

What could happen? If your car is in control of where you are going, you want it to know exactly where it’s going. If you’re like us, you’ve suffered enough misdirection at the hands of your GPS to know improvement is needed.

But there are even bigger issues than that.

As an expert raised in a CES conference session, there are too many instances today in which a driver is faced with only bad choices. For example, if approaching an unexpected crowd of people in the path, is it better to drive into the crowd or divert the car into a head-on collision with oncoming traffic?

The programmer of your driverless car will have made that decision for the car before you even get behind the wheel.

For the sake of the independence of the skyrocketing numbers of senior adults, hopefully those issues will be resolved soon – or other transportation options made practical.

In the meantime, it’s hard not to ooh and ahh when you see a car navigating the roadway without a human behind the wheel.

Yes, automotive innovation is right at home as part of the International CES.