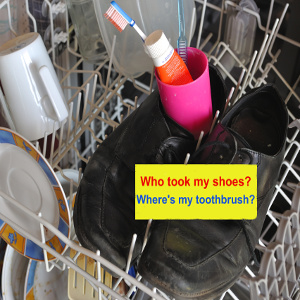 Damage to our brains resulting in dementia, particularly Alzheimer’s Disease, begins a number of years before family caregivers observe symptoms.

Family caregivers, especially spouses, will say “one day he was fine and the next day he couldn’t remember anything.”

Including how to find the bathroom.

Others caregivers say they knew something was wrong and some others say they saw few signs in the years beginning this journey into dementia.

Older adults often know themselves that something is amiss but resist seeking help. The signs of Alzheimer’s can be hard to recognize.

10 Early Signs and Symptoms of Alzheimer’s

The Alzheimer’s Association has put together a list of early signs that can help adults and caregivers recognize a potential brain disease and seek help.

Alzheimer’s is a brain disease that is degenerative, that is it has a slow progression of decline, affecting memory, thinking and reasoning skills.

Here is their list of the 10 warning signs for which we should be on the lookout in our senior loved ones.

If you or your senior loved one notice these signs, it is important to start a discussion with the doctor. Don’t chalk it up to normal aging. Early detection of dementia can offer your family time to seek treatment, maintain improved independence with appropriate strategies, and most importantly plan for the future.

A new study from Rush Alzheimer’s Disease Center in Chicago found the person who is experiencing dementia may lose their awareness of their memory problems as much as two to three years before their dementia is full blown.

Researchers say that this lack of self-awareness has been suspected but never shown before the Rush Center was able to do so.

Learning more about the disease’s natural progression and its effect on the person is important to understand. They state that if you are worried about your own memory, you probably don’t have dementia. Chances are that you might not ever have dementia because having memory loss alone is not indicative of future dementia.

Their findings were recently published in Neurology. The study involved 2100 older adults evaluated over a ten year period. They administered standard tests of memory and thinking skills. They found that 239 were diagnosed with dementia during the study time frame. Their awareness of their own memory loss started to fade approximately two to three years before the onset of dementia.

What this means for family caregivers is that it will be important to observe the warning signs of dementia because the person who is experiencing a decline in brain function will not be able to recognize it in themselves to seek treatment.

Researchers point out that doctors who ask “how is your memory” during a routine exam will miss those with dementia. They need to speak with caregivers to ascertain true memory loss to diagnose dementia onset.

We are learning more and more about how our brain functions and what causes it to be damaged. This is great news because the more we know about the causes of brain damage leading to dementia, the more likely there will be effective treatments and hopefully a cure.

At this time, however, there is neither.

The destruction of brain cells resulting in progressive memory loss and other brain functions, such as thinking and reasoning, is known as dementia. Brain cells become damaged and eventually die.

Alzheimer’s disease is the most common form of dementia but there are other types as well, including Lewy Body Dementia, vascular dementia, mixed dementia, and frontotemporal dementia.

There are specific points of interest or abnormalities in our brains that have been found to be hallmarks of the disease.

The Alzheimer’s Association has a very interesting Interactive Brain Tour that allows you to see these changes depicted.

Why these hallmarks appear in our brains is still unknown, though more research is ongoing every day. The leading theory is that multiple factors, rather than one specific cause, lead to brain damage found in dementia.

There are several risk factors that have been accepted as influencing the development of dementia including age and family history or genetics. These are non-modifiable risk factors.

The more we maintain a healthy lifestyle and take charge of our well-being, the better our bodies will be able to defend against the brain damage that leads to dementia, including Alzheimer’s disease.

Staying healthy can prolong our brain health, even in the face of non-modifiable risk factors. You may still develop dementia but hopefully you will live longer before it develops.

Family caregivers can help their senior loved ones (and themselves) recognize the signs of Alzheimer’s disease, seek help early and, hopefully, even prevent dementia.