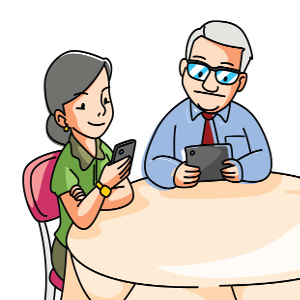 Mobile devices have become indispensable to the lives of many of us, with their role only growing with each new application.

While younger age groups have been more quick to adopt smartphones, tablets and wearables, seniors in growing numbers are finding the devices valuable to their lives.

Are your senior loved ones among them?

It’s encouraging to see those numbers grow because older adults, ironically, are likely to see the greatest benefit to their lives from mobile devices and the capabilities they enable. Not today, maybe, but in the not-too-distant future.

As with many aspects of life, though, seniors may view the appropriate role of mobile devices differently from other age groups, especially compared to young adults who have only known a digital world.

As family caregivers encourage the adoption by aging loved ones of mobile devices in preparation for the growing numbers of life and health equipment and applications that will use smartphones and tablets for connectivity, it’s important to take into account how seniors see the place of the devices in their lives and the world around them.

When reaching out to senior loved ones and growing their level of comfort with mobile devices, especially smartphones and tablets, it’s important to understand their view of the boundaries associated with the devices’ usage.

Achieving the benefits that will come from device usage may require moving those boundaries, but ignoring their view in doing so only invites resistance, which could slow adoption of the technology that will mean so much to senior living.

A new report, “Americans’ Views on Mobile Etiquette” from Pew Research Center provides insight into the views of each age group, allowing us to compare seniors’ views of appropriate usage with those of other age groups.

The report compares the opinion and reported usage of cellphone users in each adult age group. While a high percentage of seniors now use a cellphone of some type, it’s important to keep in mind the outlook may differ for those who don’t use one of the devices.

Views of Device Use in Public

Pew reported on the view of cellphone use in a variety of public situations, with seniors viewing usage less favorably than other groups to varying degrees.

Understanding where seniors see device usage to be acceptable can help avoid situations that irritate them and may result in resistance to letting mobile devices become indispensable.

Nine of ten adults reported using their phones recently at a social gathering, with virtually all the youngest adults saying they did so. While a majority (69%) of seniors said they did so, they still pulled down the average significantly.

These are some of the ways devices were reported to be used at gatherings. Keep in mind the results likely reflect greater smartphone usage by younger adults, with many seniors still using regular (non-smartphone) cellphones.

Even when looking at the basic functions of the cellphone, making and receiving phone calls, seniors lagged behind other age groups. Still, they were more than twice as likely to have taken an incoming call as to have placed a call during a social gathering.

Engaging vs. Disengaging with the Cellphone

Particularly interesting and instructive are the results from a deeper dive the Pew study took into cellphone usage in social gatherings. They asked question about the intent of device usage, whether to add value to the gathering or allow the user to disengage from the activities around them.

Not surprisingly, adults in all age groups said they were much more likely to use their phone to add to the gathering, such as by sharing a picture or discussion of something occurring at the gathering with others or by getting information that would be interesting to those at the event.

While only small percentages, no more than one in four, of any age group indicated using their cellphone to get away from the gathering, at least mentally, far fewer seniors than young adults indicated doing so.

What the Study Results Mean to Family Caregivers

We see the Pew study providing valuable information to family caregivers who are trying to encourage senior loved ones to adopt smartphones and tablets into their lives as a gateway to connected living. While survey results are certainly secondary in importance to knowing our own loved ones, we ignore these results at our own peril.

Seniors who don’t see it as necessary or even appropriate to use their own digital devices in certain public or social settings may view negatively others who choose to do so (including us).

Even worse, perceptions about the device usage of others may cast the devices themselves in a negative light and deter our senior loved ones from using devices of their own.

Considering what connected devices are going to mean in the future to seniors’ ability to live independently in health, safety and happiness, we should be vigilant to avoid actions that turn our own loved ones off before they are able to realize the ultimate benefits of connectivity.

It’s at least a little ironic many of us trying to find ways today to unplug from our always-on connections will one day value what those connections mean to us as family caregivers, as they enhance the lives of our senior loved ones, and eventually our own lives as seniors ourselves.