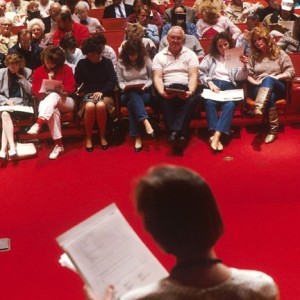 I had the opportunity recently to speak to a large group of seniors.  They were independent and actively engaged in their community, church and with each other. They come together monthly to share fellowship, friendship, learn something new from a community speaker and enjoy a meal cooked by one of their members.  The group brings with them a wide variety of backgrounds, stories of having traveled around the world and experiences of living in far off places.

I had planned to share my knowledge and experience with the boomers but decided to gain some of their wisdom while I was there.

I asked the group several questions and was surprised with some of their responses.  They replied with a show of hands. See if you are surprised too.

1. How many of you own a computer?  All raised their hands.  Many people think seniors have not embraced computer technology, but not this group.  They are surfing the web frequently and with skill.

2. How many of you send or receive email? Most raised their hands.  We know that many seniors are communicating via email and more are connecting every day.

3. How many of you engage in social media such as Facebook, twitter or some other form? Less than 25% raised their hands and many shook their heads no.  Perhaps they haven’t seen a need yet as the younger generation has, they still use a phone to call their friends and aren’t used to telling the entire world what they ate for lunch.

4. How many of you have skyped? Almost all raised their hands and shook their heads a resounding yes and then the chatter began.  How anxious they became to share their experiences!

I was surprised that so many had not only heard of this technology but were using it regularly.  I asked with whom were they interacting to be told family, children, grandchildren, and friends.  They were closing the geographic gap by visiting electronically frequently with friends and family in other countries.  They were very excited to share their experiences with their web cams and video chatting.  They were thrilled to be able to share not only  photos but real time face to face conversations with people from across the globe.

This group calls themselves hilltoppers.  When I asked the origin of their name they replied “we are on the top of the hill looking over the edge” as we age.  I think that what once was considered old age is now middle age with much life ahead.  I think we all agree that the mountain has been moved.  Engaged, active seniors have much life left to be lived.  I feel privileged to have met them.

3 thoughts on “Seniors Connect to Technology and Love It!”