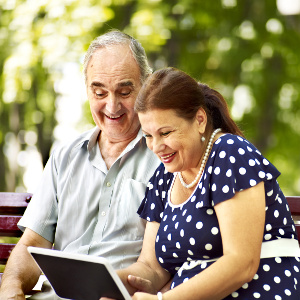 Despite what you might see on TV commercials, growing numbers of seniors know what it means to post something on their wall or unfriend someone.

Yes, grandma is using Facebook (grandpa too), just as we thought would happen when advocating that family caregivers urge senior loved ones to get on the Web – even if they have to give them the means to do so.

While seniors still lag other age groups in their social media use, they are closing the gap quickly.

There is still more gap to close, though. With 4 in 10 seniors not yet active online it means only about one third of all seniors are using Facebook.

Facebook isn’t the only – or even the biggest – reason we’re in favor of getting seniors active online, but there are real benefits for many seniors on using the social networking site.

Senior Care Corner® often consults and shares data from the Pew Research Center because we find their reports to be very credible and informative. The latest of those, “Social Media Update 2014,” is the primary source of the statistics discussed in this article.

Pew, in their survey conducted in September 2014, found the participation of seniors on each of the major social networking sites was growing, though continuing to lag the overall US population.

Note these statistics are percentages of online adults. The growth in numbers of seniors using social media is even greater than these numbers indicate because the share of seniors active online is increasing as well.

These are not the only social networking sites, of course, but are generally seen as the predominant general-use sites.

The data from Pew reinforces what we have been hearing from family caregivers and seniors about online usage.

We find it gratifying to be told by family caregivers they followed our advice despite doubts their senior loved ones would use the web, only to see the seniors not just accept but enjoy being online.

Time and again we hear of grandparents connecting more frequently with grandchildren of all ages, with both looking forward to the next opportunity to Facetime or Skype, viewing the next family YouTube video or seeing the next school masterpiece in a Facebook picture.

Older adults are also increasingly connecting with each other and the world around them through the web, not only learning about but participating in what is happening in their communities. As we frequently discuss at Senior Care Corner, keeping seniors’ minds engaged is good for both their physical and mental health, especially for those who are living independently.

Many Seniors Yet to Enjoy Web’s Benefits

Our excitement over the growth in seniors’ use of the web and social media can’t be allowed to let us overlook the 2 in 5 older adults who aren’t included in those statistics and have yet to share in the benefits.

We – family caregivers and members of the community – have more work to do in demonstrating the benefit of being online to seniors of all ages, whether they are aging in place in their own homes, living with family members or calling a senior living facility their home.

Remember, too, there are many seniors for whom the internet is beyond reach because they can’t – or don’t realize they can – afford either the devices or access to all the web has to offer.

While even broadband internet is free or very inexpensive in a growing number of communities and tablets computers have become a commodity, without help they can still be beyond the reach of the many seniors who are choosing between eating and getting their medication.

Virtually all seniors in the US have the web and its benefits within reach if they have the desire and financial ability to use it. Let’s keep the statistics growing until they have the opportunity to realize those benefits.