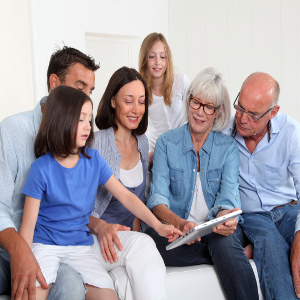 Sometimes even the English language can seem like someone is speaking in a foreign tongue.

Older adults, who lived much of their lives without today’s technology, can feel that tech speak is unintelligible and the whole world is trying to tell them something they don’t understand.

It can be like talking about a new medical condition or the effects of medication with a doctor when they use terms we never heard before.

It would be so nice to learn the words to describe a variety of technology solutions that could benefit them or simply make their life a little easier.

Helping seniors (and their family caregivers) learn at the least the most frequently used tech terminology could be very helpful in getting them comfortable using technology and gaining the benefits it can bring to their lives.

Here are some of the more common words used by those familiar with technology that many seniors — and family caregivers — may not yet have mastered.

Apps – app is an abbreviation for the word application, it usually refers to a software program that performs a specific function. The term app refers to mobile devices and a user must download them to use. They open up in the operating system. Examples of apps include mobile banking, games, maps, GPS, business links, health links, etc.

Artificial Intelligence or AI — intelligence demonstrated by a machine that is normally associated with humans, such as the ability to observe a situation and make a decision regarding how to proceed based on the information observed.

Blockchain — a list of records, linked using secure code, that grows with each new record added, with none being deleted. Each record is accessible only to those who have the appropriate key code. A blockchain allows secure records, such as medical records, banking information, contracts, and more to be securely maintained without the need of entities in the middle of the transaction, giving parties much greater security potential than is achieved with current systems.

Bluetooth – short (such as within a room or home) distance wireless interconnection between mobile phones, computers, and other electronic devices. Data is sent over radio waves instead of through wires/cords. Devices that are able to connect have a Bluetooth chip in them.

Data – pieces of information, such as names, phone numbers, medical device readings, whether a light switch is on or off, and much MUCH more.

Download – receiving information or data from one computer or electronic device into the memory of another usually over the internet.

Flash drive – a small portable device for the purpose of storing files or data and can transfer that data to another device as well as be used to back up data. This data storage device is also known as thumb drive, flash stick, memory stick, jump drive, or USB memory.

HDMI cable – a cable that transmits high definition digital audio/visual (compressed or uncompressed) from a source device to another compatible device. For example, connects a computer to a projector to present a video.

iOS – an operating system for mobile devices manufactured and used by Apple devices such as iPads and iPhones.

IoT – Internet of Things; refers to a system of interrelated electronic and mechanical devices that are connected so that no human contact is required for operation (human to human or human to computer). They connect wirelessly using a hub as point of connectivity. They transmit data amongst devices.

Link – it is an HTML object that allows users to jump to a different web location by clicking it. Links are often attached to images, words, or titles. They can be displayed using blue letters or underlined but this is no longer the default. Term is short for hyperlink.

Operating system – a system that allows software to communicate with hardware in computing to allow programs to run. Examples include Microsoft Windows, iOS, and Android.

Phishing — scam that uses email to fraudulently obtain personal data such as credit card numbers, passwords, and social security numbers by tricking recipients into thinking they are opening and responding to an email from a known or reputable source.

Platforms – refers to a computers operating system or group of technologies that are used as a base for applications; examples for personal computing are Windows, MacIntosh and tell on which kind of computer system a particular software will work. Social media sites are often described as platforms as well (Instagram, Twitter, Facebook, etc.).

Remote access – the ability to use a computer or electronic device from a separate or remote location as well as the ability to control the device or app once the connection is made.

Streaming – transmitting or receiving data over a computer network in such a way that you can begin viewing the data before it is fully transmitted, such as when watching a video.

Strong password – passwords that are harder to hack, which will contain a variety of characters such as lower and upper case letters, numbers, and symbols and are at least 8 characters long (typically longer).

Sync – abbreviation for synchronize; connecting data between devices such as computer and smartphones, typically via Bluetooth, Wi-Fi, or cellular connections.

Upload – the opposite of downloading, sending data from one electronic device to another. You will upload emails and photos when you send.

Wearables – electronic technology device that can be worn, such as exercise trackers, or can be imbedded in clothing or as tattoos directly on the skin. Powered by microprocessors, they are hands-free and can send or receive data via the internet.

Wireless – transmit data without cables or wires using radio waves. Wi-Fi and Bluetooth are both networks that allow data to transmit without wires. A wireless card or router/modem is used for Wi-Fi and a chip is generally used to enable Bluetooth.

5G — refers to the fifth (next) generation of mobile internet connectivity, which will provide much faster connections and enable much higher volumes of data to be communicated.

Seniors may be more comfortable engaging with technology when they are relieved of feeling embarrassed due to a lack of knowledge or understanding of tech and its terminology.

Simply learning some of the technology industry’s language may empower them to get more involved with tech that is beneficial to them and their ability to live independently.

Geek speak shouldn’t be keeping them from using technology.

Keep in mind the objective is building comfort, not making anyone experts in the field.

Learning a few new words shouldn’t be a barrier and it might be fun especially if a tech-savvy or tech geek grandchild is the teacher!

This is a great way for multi-generational interaction to happen that will benefit everyone.